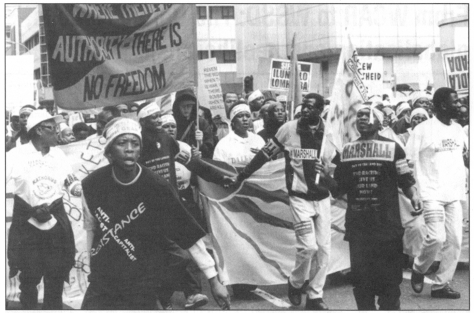 Leaflet produced by the Bikisha Media Collective, Anarchist Union and Zabalaza Books against the World Bank meeting with the South African National Department of Agriculture in Durban, circa 2001 END_OF_DOCUMENT_TOKEN_TO_BE_REPLACED

The leaflet below was distributed widely by the (Johannesburg-based) Bikisha Media Collective (BMC), and the (Durban-based) Anarchist Union (later Zabalaza Action group, ZAG) in 2001 (UPDATE 28/03/2018: AU may have had an active member in Port Elizabeth as well). Large numbers were put out at the World Conference Against Racism (WCAR) United Nations summit, held from 31 August until 8 September 2001 in Durban, South Africa. The somewhat unconvincing and unnecessary argument for the absolute novelty of racism (i.e. that racism only emerged in the 1600s, which is not accurate and not essential anyway to the case made) does not detract from the many strengths of the text (including its stress on the links between racism and the class system, including in the modern period). It reads very well, almost 13 years later.

Get the PDF version here. This PDF was updated (in lay out only) from the version handed out at the WCAR.

Anarchism, Racism and the Class Struggle

According to South Africa’s ruling elite, the problem of racism is basically a problem of ignorance. “Education”, according to Barney Pityana of the Human Rights Commission, “will cure racism”. This argument sounds appealing, but it is inaccurate and misleading. Most importantly, this view conveniently ignores the role of the CAPITALIST SYSTEM in inventing and perpetuating racism. Since capitalism emerged in the 1500s, it has committed many crimes against humanity. But few of these crimes are as vile as racism. Perhaps that is why Barney Pityana – as a defender of capitalism and the ANC government’s privatisation policies – wishes to hide capitalism’s dirty laundry with his stress on “education”.

Capitalism developed as a world system based on the exploitation of workers, slaves and peasants – black, brown, yellow and white. END_OF_DOCUMENT_TOKEN_TO_BE_REPLACED

The World Conference Against Racism (WCAR), a United Nations summit, was held from 31 August until 8 September 2001 in Durban, South Africa. It provided a major focal point for protestors: South African anarchists were present both as activists in the Anti-Privatisation Forum (APF) and as members of the (Johannesburg-based) Bikisha Media Collective (BMC, an APF affiliate), and the (Durban-based) Anarchist Union (later Zabalaza Action group, ZAG). Here are some photos, taken on a digital camera at the time, which show anarchist banners at the march. Digital cameras have, happily, improved in later years. 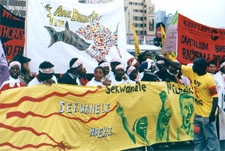 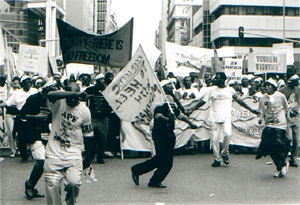 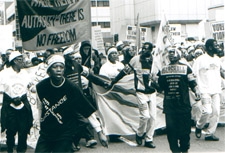 After the dissolution of the Workers Solidarity Federation (WSF) in 1999, there were a number of new anarchist initiatives.  In Durban, Zabalaza Books and the Anarchist Union (later the Zabalaza Action Group, ZAG) were the most important. Durban activists linked to these projects also established a short-lived South African Regional Organising Committee (ROC) of the revolutionary syndicalist Industrial Workers of World (IWW). That is,  the Durban-based IWW was formally linked to the main IWW in the United States.  The Durban-based ROC did not have much success in forming IWW unions. Note: address details on second last page of the PDF.

Note: A later attempt at a South African IWW, this time based  in Cape Town, took place in the early 2010s, with similar results. 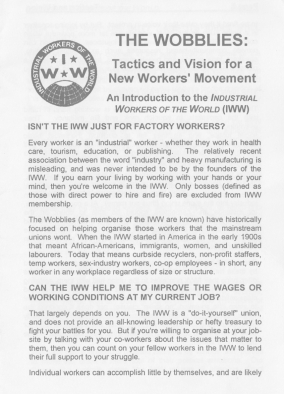 This leaflet was issued by Bikisha Media Collective in Johannesburg, and the Zabalaza Action Group (ZAG, formerly the Anarchist Union) in Durban.  Both had historical links to the Workers Solidarity Federation, and would help form the subsequent Zabalaza Anarchist Communist Federation (later Front; ZACF). Distributed at anti-war actions in Johannesburg central and at the University of the Witwatersrand. Responded to the September 11 2001 bombings in the United States, and the subsequent US war escalation. Issued 2001.

UPDATE: here is a PDF of the leaflet as first issued. This version  endorsed by Anarchist Union, not ZAG.

No War But The Class War!

Against capitalism – Against the US government –
Against state and fundamentalist terrorism

The September 11, 2001 attacks on the World Trade Centre (WTC) and the Pentagon by suicide bombers, leading to over 6,500 deaths have grabbed world attention.

We revolutionary anarchists condemn the attacks and extend our condolences to the families of those injured or killed. The death of thousands of ordinary civilians – including many ordinary workers – is not acceptable. The use of civilian aircraft for such an operation is authoritarian and coercive and shows the contempt of terrorists for human life. It also shows that the terrorists are anti-working class: attacking people just because they are “American” regardless of their class position is reactionary and xenophobic.

After all, US workers are also victims of US capitalism. Bill Gates personally has more wealth than the bottom 45% of US households. In 1999, top executives earned 419 times the wage of a blue-collar worker, up from a difference of 42 to 1 in 1980. This is directly due to the vicious implementation (and often racist) of neo-liberal / privatisation policies within the US itself.

Down with US terrorism

At the same time as we oppose the terrorism of the bombers, we oppose equally the terrorism of all states, especially the US government This capitalist military-industrial machine has been involved in more than 216 armed interventions against other countries and regions. END_OF_DOCUMENT_TOKEN_TO_BE_REPLACED