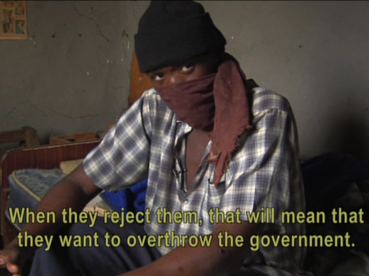 Comrade Mandla Khoza (or “MK,” as his friends and comrades knew him) passed away on Friday 26 July in his home town of Siphofaneni, Swaziland (Eswatini). He had long suffered from sugar diabetes. He leaves behind four children. One of the pioneering members of the Zabalaza Anarchist  Communist Federation (ZACF) founded in South Africa on May Day 2003, MK was committed to a social revolution that would place power and wealth in the hands of the working class, the peasants and the poor. As he would often say: “It doesn’t matter if you change who sits on the throne: you have to get rid of the throne itself.” This obituary commemorates his life as a militant.

Comrade Mandla Khoza (or “MK,” as his friends and comrades knew him) passed away on Friday 26 July in his home town of Siphofaneni, Swaziland (Eswatini). He had long suffered from sugar diabetes. He leaves behind four children. One of the pioneering members of the Zabalaza Anarchist Communist Federation (ZACF) founded in South Africa on May Day 2003, MK was committed to a social revolution that would place power and wealth in the hands of the working class, the peasants and the poor. As he would often say: “It doesn’t matter if you change who sits on the throne: you have to get rid of the throne itself.” This obituary commemorates his life as a militant.

MK was born on the 22 May 1974 in Swaziland, a small country in the iron grip of the Swazi royal family under the Tinkhundla regime, and economically dominated by neighbouring South Africa as well as by Britain. Siphofaneni is near the large town of Manzini, and close to the sugar cane plantations. Like many Swazis, MK came to South Africa to escape the grinding poverty of his homeland. MK and his cousin, Mandla Dlamini (also a pioneering ZACF member), worked at a Coca Cola factory but lost their jobs. The two were living in the Motsoaledi squatter camp in Soweto, Johannesburg by 2001. Here, Mandla Dlamini’s father ran a spaza shop [1] and shebeen [2] from his house, and the two young men assisted. A friend remembers that “The two cousins used to assist school kids with school work, help neighbours with chores and were appreciated by people.”

They joined with South African comrades to form the anarchist Black Action Group in Motsoaledi around this time, which helped found the ZACF in 2003. Together, these comrades also founded the Phambili Motsoaledi Community Project in the squatter camp (in 2002), which ran a food garden, library and meeting centre, a newsletter called “Vuka Motsoaledi,” and subsequently, a community action structure called the Motsoaledi Concerned Residents (MCR; founded 2005). Like the ZACF, with which these two structures were closely linked, these were part of the Anti-Privatisation Forum (APF). The APF was a broad coalition of unions, township groups and left formations, founded in 2000: it covered much of Gauteng province, Africa’s industrial heartland, including Soweto.

MK periodically returned to Swaziland, where the ZACF built a small presence and distributed materials. For example, in 2003 ZACF was in contact with dissidents in the Swaziland Youth Congress (SWAYOCO), youth wing of the banned People’s United Democratic Movement (PUDEMO). Some young and upcoming revolutionaries were interested in moving beyond a reformist agenda. On one occasion, a South African ZACF comrade was arrested at the border gate on the Swazi side, coming from a May Day rally in Swaziland, and carrying anarchist political materials.

MK got involved in the Swaziland underground opposition movement, joining SWAYOCO to promote anarchism. While ZACF was clear that a parliamentary democracy would not solve the problems in the country, it would be preferable to the dictatorship, and open space for more struggle. Therefore, it argued for democratic reforms, including an end to the Tinkhundla regime, political amnesty, the abolition of chiefly privileges, gender equality and land reform, full union rights and a living wage campaign in the plantations, factories and farms as steps towards a counter-power that could make more radical changes.[3]

From around 2005, MK and his cousin Mandla Dlamini began to spend most of their time in Swaziland, despite the extremely difficult conditions. For example, on Saturday 1 October 2005, MK was involved in a SWAYOCO demonstration in Mazini against the absolutist system headed by King Mswati III, which was attacked by the Royal Swazi Police. He was among the eight SWAYOCO activists arrested that day, held at Zaklehe Detention Centre on charges of disturbing the peace. Following pressure from below, the eight were released on bail, appearing in court on 7 November.

Further pressure came when the ZACF was falsely accused in the Swazi press in early 2006 of bombing police vehicles. ZACF argued against the turn to armed struggle that was drawing in some of the underground, arguing for a mass popular movement, including the unions. It advocated struggle “to go beyond the usual bourgeois betrayal and involve a destruction of the Swazi capitalist state and its replacement by decentralised popular assemblies”.[4] Nonetheless it campaigned in solidarity with those jailed for such actions, stressing that desperate steps were a response to the oppression that tormented the kingdom. Repression mounted, with regular arrests and trials of PUDEMO and SWAYOCO activists, often based on bogus charges of “terrorism.” At one point MK was forced to go into hiding across the border, in South Africa’s Mpumalanga province, due to ongoing harassment and intimidation for his political activities by the Swazi Special Branch.

MK was in South Africa to attend the December 2007 ZACF congress, which restructured the organisation to streamline its operations.[5] One of the major decisions was to replace the ZACF’s awkward multi-country structure straddling South Africa and Swaziland with an autonomous Swaziland anarchist group, allied to ZACF. He participated in the next ZACF congress, a year later, reporting modest progress.

An anarchist study circle was formed in Siphofaneni with SWAYOCO comrades. There were numerous trips by Johannesburg-based comrades into Swaziland, bringing in material, maintaining contact and meeting people from PUDEMO and SWAYOCO. MK wanted to start a community project, for oppressed and exploited people. He felt a deep sense of duty. He was interviewed in a 2007 documentary on the Swazi democracy movement, “Without the King,” as a masked “Anonymous Political Activist.” He stated “It’s very, very tough for us here… I have to change the system because I can’t leave here. If I can leave, what about other people, what can they do? We must fight together to change the system so that everything will come right here.”

His position was that of a revolutionary: “If we were governing ourselves, we could be organised.… There is nowhere the government machinery is helping. If it’s not for the World Food Programme’s food, we could be died [dead] a long, long time ago… He’s [King Mswati III’s] having everything. He earns and controls everything… the people themselves must understand what the government’s doing to them, then the people themselves, they’ll reject the elements in the government that are suppressive or oppressive to them. When they reject them, that will mean that they want to overthrow the government.”

The interview can be seen here: https://youtu.be/12YAgDa0xqY

Results of these years of militancy were limited, and times were always tough: MK was unemployed and poor, and sought ways to make a living, while struggling with illness. In recent years contact became more sporadic. His passing on is a lesson that we are strong through each other, that we must take care of each other and hear each other. MK knew, a friend recalls, that for people to be free they have to do it themselves: “that’s why he was anarchist-communist and didn’t believe in replacing one government by another one.”