The Anarchist Revolutionary Movement (ARM) section at Wits University used to distribute copies of this leaflet. It was sourced from the US/ Mexico magazine, Love and Rage, which had become locally available in South Africa (SA). This was produced by the Love and Rage anarchist federation in the US, a loose body that later collapsed — in part due to its internal political contradictions. One SA source of Love and Rage seems to have been bundles sent to the anarchist-linked and ARM-linked local distro called “Backstreet Abortions.” At the time, Love and Rage had several South African contacts — it also had a falling out with the “Backstreet Abortions” people (but not the “class-struggle” wing of ARM) over the issue of “national liberation.” There was also some internet contact by the “class struggle” ARM with key people in Love and Rage, like Christopher Day.

The  leaflet below was from the 1970s edition Lorenzo Komboa Ervin’s pamphlet Anarchism and the Black Revolution.  Ervin, a former Black Panther-turned-anarchist, was at the time of writing incarcerated at Marion prison, Illinois, USA. (He later revised the pamphlet at least once; the apparent emphasis on white-race-privilege theory, and on racially-separate organisations, in the 1990s edition was not accepted by the Workers Solidarity Federation  (WSF), a successor of the “class struggle” wing of ARM. WSF completely accepted that black Americans and other people of colour were a distinct, oppressed, group, and rejected “we are all in the same boat” class analyses, but it took a distinct position: see here). ADDITION: it should be mentioned that this extract was copied directly — formatting and all, plus introduction–from an issue of Love and Rage.

Herewith the 1990s ARM text, based on the 1970s Ervin text, from Love and Rage, as distributed in Johannesburg : 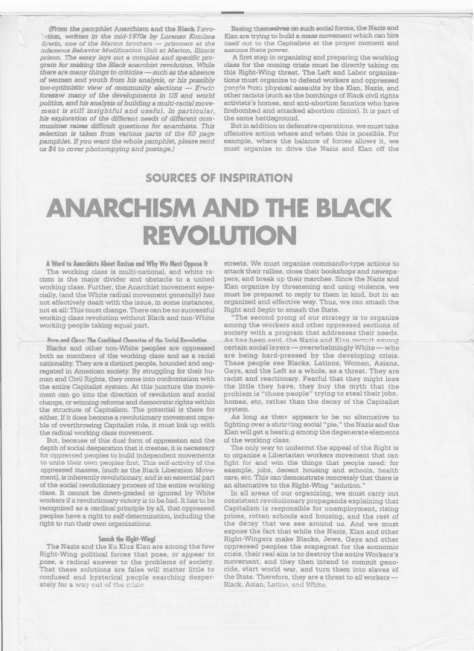