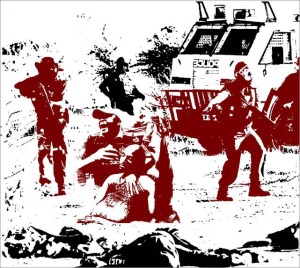 Over the last few years we have seen many people, protesting for basic rights and a living wage, being killed at the hands of the police. We remember how Andries Tatane was shot over and over with rubber bullets by the police for simply demanding basic services, like water, housing and electricity. We remember too how the state’s judges let these killers off. We also remember how the workers at Marikana were brutally gunned down by the police for striking for a higher wage.

In Khayelitsha too we know that police harass and beat people when they protest. Over the last few months the Progressive Youth Movement (PYM) and SST residents have been demanding the basics of life, like housing and sanitation. But when this happened the police attacked them and harassed them. People can’t even walk in the street in red shirts without being harassed by the police and state.

We need to fight this unjust system including police brutality. We need to build our organisations to win houses, to win free water, to win electricity, to win better education, to win better salaries and to stop evictions. The time is now to stand up for a better life ourselves – all the politicians from all the parties do is lie to us and use the state to make themselves rich and attack us. We need to end poverty, inequality and all forms of oppression, including the attacks by the police, and we as the poor, workers and the unemployed have to build our struggles and movements, and unite in struggle, to do so.