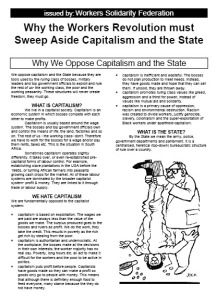 – Why We Oppose Capitalism and the State –

We oppose capitalism and the State because they are tools used by the ruling class of bosses, military leaders and top government officials to exploit and rule the rest of us- the working class, the poor and the working peasantry. These structures will never create freedom, they must go.

We live in a capitalist society. Capitalism is an economic system in which bosses compete with each other to make profits.

Capitalism is usually based around the wage system. The bosses and top government officials own and control the means of life: the land, factories and so on. The rest of us – the working class- don’t. Therefore we have to work for the bosses for a wage and/or pay them rents, taxes etc. This is the situation in South Africa.

Sometimes capitalism operates slightly differently. It takes over, or even re-established pre-capitalist forms of labour control. For example, establishing slave plantations in the USA before the 1860s, or turning African farmers into peasants growing cash crops for the market. All of these labour systems are dominated by the broader capitalist system- profit & money. They are linked to it through trade or labour supply.

We are fundamentally opposed to the capitalist system:

What is the State?

By the State we mean the army, police, government departments and parliament. It is a centralised, heretical (top-down) bureaucratic structure of rule over a country.

The State is a direct result of the fact that we live in an unequal society. In South Africa, 5% of the population own 85% of all wealth, 120,000 capitalist farmers control all the land in the historically “White” areas, and 5 companies own 80% of all shares on the Stock exchange.

The State exists to defend the ruling class minority at the top of this system, if not by persuasion then by force. This is true of all States, whether or not they call themselves capitalist, socialist or democratic. Wherever you have a State, you have the rule of a privileged few over the exploited many. The State protects capitalism and the all the veils that accompany it. When workers strike, they are attacked by police- who ever heard of a boss being arrested for paying low wages?

The State is built to allow this minority to rule over the working and poor majority. It has a top-down structure that concentrates power in the hands of the few at the top. There is no way that ordinary people can participate in the running of this apparatus. Its structure makes it inevitable that all States lead to the few ruling the many.

This means that real change cannot come through elections. Instead, we can only win reforms through mass struggle against capitalism and the State. We must defend all political freedoms, but at the same time boycott elections and rely on people power and mass organisation to win. This is the way to win gains like better pay, and also the way to defeat both capitalism, the State and all oppression- and establish a free libertarian socialist society (anarchosyndicalism).

– Workers Revolution from Below –

Capitalism and the State are based on the exploitation of the many by the few- the ruling class. These structures are also the main cause of special oppressions like racism. Capitalism, the State and all forms of oppression must be fought and ultimately replaced by a democratic libertarian socialist (anarchosyndicalist) system. This task can only be successfully accomplished by the working class, the poor and the working peasantry.

Society is divided into different classes. By “class”, we mean a group of people with a common relationship to the structures of political and economic power.

The biggest class in South Africa is the working class. It consists of manual and white collar workers and their families, farm workers, service sector workers, labour tenants, the unemployed poor, rank-and-file soldiers, and the marginalised youth.

All these people lack political and economic power. They do not own the means of life- factories, land, offices etc. They are therefore dependent on wages earned by working for the bosses to survive (either working themselves or being supported by a family member).

The other key class in society is the ruling class. It is made up of the bosses (large capitalists),top military officials like generals, and top governmentofficials (like directors and professional politicians).This class owns all the land and factories. It makesprofits by exploiting and oppressing the workers andpoor. This is called capitalism. It also has politicalpower in that it controls the State (army, police,government departments, parliament). The State actsto defend this class.

There is also a third class- the middle class. This is not everyone who gets a good wage! It meansthose who stand between the two key classes: smallcapitalists who only employ a few workers; middlelevel management; and professionals (like lawyers).This class is caught in the middle of the class struggleand is divided over which key class it supports. But itsprivileged position tends to make it conservative.

Finally, in some countries there is also a classcalled the working peasantry. This refers to smallfamily farmers who do not employ wage labour. Thisclass is the natural ally of the working class and hasthe same enemies- the ruling class.

We believe that the only people who can achieve these tasks are the working class and the working peasants.

Why? Class struggle is central because it is the struggle of the majority the working and poor people.

The majority of people are working class and therefore have a direct interest in opposing capitalism and the State. That is why most people are actually engaged in class struggle, through actions like strikes, squatting unofficially, land invasions, rent boycotts, getting back at the boss etc.

The class struggle is central because it is as workers that we have the “social power” to fight backwe produce all wealth and goods under capitalism, which means that we have the ability to hit the bosses where it hurts – in the pocket- by workplace actions.

The class struggle is central because our experience under capitalism forces us to organise as a class. Workers are often concentrated in large factories and face similar conditions- this makes it easy and vital to organise mass struggle, fighting structures like trade unions. Large working class neighbourhoods and schools have a similar effect.

Class struggle is not just about factory resistance, although this is essential- it is about every action by working and poor people to resist the bosses and rulers.

This does not mean that we are in favour of the “whole community” (everyone from workers and the unemployed to local business-men and “leaders”) being mobilised. We are opposed to any attempt to bring bosses and elites into our struggles. Poor people must do it for themselves- to build an alliance with the rich and powerful means to sacrifice the struggle against the rich and powerful to confusion and treachery.

As for the middle class, we recognise that it will split before and during revolution. They can join the struggle- not as leaders and intellectuals giving orders, but as comrades who come to repay a debt to the masses, and honestly rejecting the privileges of their class.

It is therefore in the interests of the working class to resist the current system. By contrast, the ruling class fights to defend capitalism and the State, and is thus guilty of all products of this system. The power and wealth of the few depends on the poverty, powerlessness and oppression of the many. So it is clear that these bosses will never act to progressively change society- they will agree to reforms if forced to do so; revolutionary change will be opposed tooth and nail. It is therefore rubbish to talk about the “progressive” bourgeoisie or to put our hopes in any famous member of the ruling class- they are all rich scum.

To defeat our enemy we must understand it. Oppression does not fall from the sky- it is rooted in capitalism and the State- it is a tool to divide the working masses and super-exploit less socially powerful sections of the masses (like women and Blacks).

This means that oppression can therefore only be defeated by a struggle against capitalism and the State. Only a stateless socialist society can end the causes of racism and provide redistribution to the victims of racism by putting human need before profit.

Only the working class can win this struggle against the ruling class because only it has the numbers, power and interest to destroy capitalism and the State.

Rich Blacks may not like racism, but they do like capitalism and the State and will therefore fight to defend these structures. Strange as it may seem, they therefore defend the causes of racism.

Perhaps it is because your class affects your experience of oppression- the Black elite can go to fancy schools and live in nice houses, the Black working class cannot. The majority of people affected by special oppression, and those who in fact are affected the worst, are working/ poor people, with class grievances against the system.

And successful class struggle requires maximum unity amongst the working class. So it requires overcoming the divisions created by the bosses. This includes racial, sexual and national divisions. Special oppression like racism is against the interests of all workers as it divides and weakens the workers struggle, resulting in worse conditions for all workers. Class unity is in the interests of all doubly oppressed groups as it provides the unity and solidarity required to win gains and defeat the root cause of racism- capitalism and the State.