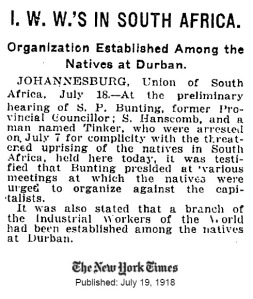 Organization Established Among the Natives at Durban.

JOHANNESBURG, Union of South Africa, July 18. – At the preliminary hearing of S.P. Bunting, former Provincial Councillor; S, Hanscomb, and a man named Tinker, who were arrested on July 7 for complicity with the threatened uprising of the natives in South Africa, held here today, it was testified that Bunting presided at various meetings at which the natives were urged to organize against the capitalists.

It was also stated that a branch of the Industrial Workers of the World had been established among the natives at Durban.